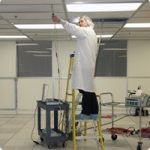 When it comes to air sampling for the cleanroom, there are many options. Consider each before choosing the right one for your class of cleanroom

Proactive companies know the importance of an active air-sampling program in a cleanroom. As with anything, each method has different benefits and problems specific to compliance needs.  When it comes to choosing an air sampling method for your cleanroom, you need to do your homework. Depending on your cleanroom class and other needs, some options will be more suitable than others.

This is one of the oldest methods available today. It entails exposing a petri dish to the atmosphere to collect bacteria-laden particles. This passive, non-volumetric method imprecisely represents larger particles because of their rapid settling rate. Plates have to be left out longer to collect smaller particles because air turbulence can cause it to resist settling. This can cause desiccation. In this case, bacterial growth would be poor, reducing the viable count. As a pre-screening tool, sedimentation is inexpensive and helpful, but it cannot be validated and is not accurate.

Impactors represent the rest of the list. In each, samples are collected by drawing air into the sampler and directing the stream at the collection agar.

A determined volume of air is drawn by vacuum through a slit opening and toward an agar-media petri dish. A turntable rotates the plate, which spatially separates microorganisms, allowing analysis of time. Time analysis is a unique benefit to this method, however, it can still be inefficient. The vacuum and rotation of the plate can dry the media leading to poor bacterial growth. Any particles not collected on the agar are forced back into the airstream and reintroduced into the isolator or cleanroom. Additionally, not all particles impact on the plate, skewing true representation of air quality. The greatest drawback is the method’s inefficiency at collecting small particles. This air sampling method would not be appropriate for cleanrooms requiring ISO Class 1 and ISO Class 6. It is, however, efficient at collecting particles larger than .5 microns.

These come in several varieties, allowing up to six stages of perforated plates and agar plates. The multiple-stage capabilities offer benefits over other impactors. A six-stage unit has a 40% higher recovery rate than one and two-stage versions. The holes in the successive plates get smaller, allowing larger particles to impact the first stage, and smaller to impact the last. Therefore, a major benefit to a stacked sieve is that it provides data on particle size.

There are a number of downsides to this method as well, though. The main ones include:

This method creates centrifugal force through a vortex, causing particles to impact along a strip lining the inner wall of the drum. As with many other methods, this one is efficient in collecting large particles. Anything smaller than 15 microns may not be deposited. Using a strip also affects the efficiency in which colony counters can read data, forcing operators to perform manual counts. Overall, there are other problems that can affect the accuracy of this method.

It should be said that centrifugal samplers used to be advantageous because they’re battery operated and small enough to be hand-held. Now, however, other samplers have comparable portability.

This method draws air through the curved section of a glass impinger and accelerates it through a jet at the bottom. This bottom is filled with a liquid that is suitable for capturing particles. The amount of collection liquid will vary depending on how concentrated you want your collected microorganisms. After sampling, the liquid is filtered and processed as usual. The larger particles are collected on the curved inlet by pipetting collecting fluid into the impinger inlet.

Impingement method air sampling is a very effective method for collecting various sizes of microorganisms and determining the initial air quality of an area. However, it is not a very convenient sampling method. Preparing the non-disposable glass containers every time is time-consuming. With a low flow rate, it also cannot be reliably validated. Other factors also can create higher counts similar to that of the centrifugal impactor.

This is the most innovative air sampling technology available. The airflow rate is programmable, and the gelatin filter is 300 microns thick, allowing it to capture the smallest microorganism. It is the only method that has both an absolute retention rate and reliably captures airborne viruses. Additionally, processing the filter is convenient and the units are easily read.

Overall the method you choose will depend on your budget, validation needs, setup, and compliance parameters. If you have questions about cleanroom validation, certification, or construction, contact Gerbig Cleanrooms. Our specialists have helped cleanroom operators for over 30 years. Call 888-628-0056 or email info@gerbig.com.