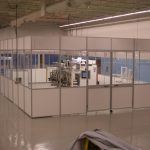 As cleanrooms continues to evolve, standard cleanrooms are not always the best option anymore. Many companies are finding that modular designs best fit their needs. Modular cleanrooms offer more flexibility, little disruption, and they often cost less than a conventional cleanroom. However, they are not always a fit. Here are some pros and cons to this alternative.

One of the best features of the modular cleanrooms is that they allow for flexibility. They can be built almost anywhere, disassembled and reassembled, redesigned, and moved from one location to another. This is especially beneficial for companies that plan to expand. As a company’s operations grow, the cleanroom can change size and shape or just be relocated as necessary.

In saying the structures can be built anywhere, think parking lots, underground laboratories, and adjacent to existing cleanrooms. According to MaryBeth DiDonna’s article, “Building the Case for Modular Cleanrooms” in Controlled Environments, Intel required a “plug and play” cleanroom that “had to be able to be in a parking lot and still have all the infrastructure built into that room.”

As for underground facilities, Black Hills State University recently announced plans to build a new underground laboratory. Controlled Environments posted the press release, “College to Build Underground Campus and Cleanroom.” The article states, “The Underground Campus will include a cleanroom that allows students and faculty to conduct a variety of research projects including low-background counting physics experiments. The Campus will also accommodate other experiments such as biology and geology and provide storage for equipment.”

Small modular systems often don’t require professionals to assemble them. They are pre-designed and can be pre-fabricated so facilities can build the cleanrooms themselves. Additionally, they can be constructed without disrupting the daily processes of the businesses that are building them.

To round it all out, these process-compliant modules are energy efficient.

Probably the biggest disadvantage to the modular cleanroom is its length limitation. A typical modular system spans about 20 feet. When it has to cover more space than that, a column needs to be in the middle of the room. This won’t be amenable to a space that has a large piece of equipment where a column would need to go. In some cases, a cleanroom manufacturer can specially design a system to accommodate this scenario, but it may not be cost-effective.

Other potential downsides may be present with window and door specifications. There is no one-size-fits-all option with the modular cleanroom. Room pressurization, traffic patterns, and direction of the door’s swing are all considerations that can present a challenge with the modular design.

While the list of pros presented here is longer than the cons, the decision really depends on the application. Consult a cleanroom manufacturer to discuss whether a modular cleanroom is right for your facility.

A Statement From Our Team on the Passing of Fred Gerbig, Founder of Gerbig Cleanrooms > Read More